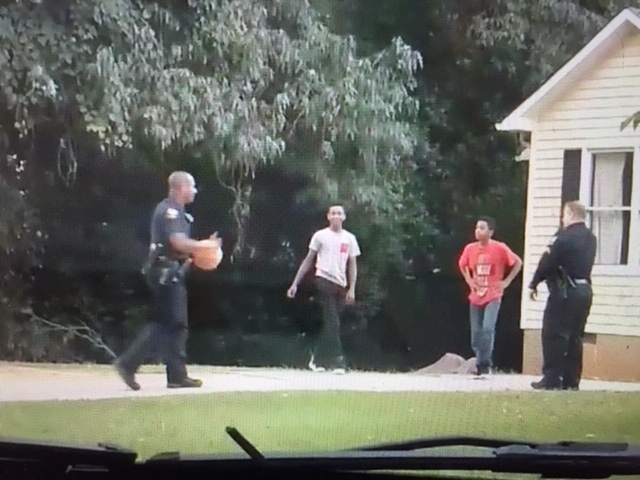 This week’s “Thankful Thursday” would like to commend two High Point, N.C. police officers who joined the Wilcots brothers, 15-year-old Jeremy and 12-year-old Jeremyah in a basketball game outside their home. The officers were in the neighborhood after finishing a traffic stop nearby. The officers had learned that the brothers were playing a game of 21. They asked the boys if they could join their game and they said yes.

When the boy’s mother, Jameka Wilcots arrived home, her heart dropped when she saw the police outside her home. She quickly realized that the two police officers were simply playing basketball with her sons in the family’s driveway. “Well I thought something was going on here at the house but it wasn’t, they’re out here playing basketball in front of my house! “It’s crazy, people keep slowing down, I guess they’re surprised to see the police playing with some children,” said Mrs. Wilcots. She was able to capture and narrate the interaction on her cell phone. She shared the footage to her Facebook page, which was viewed over 14,000 times. Mrs. Wilcots said her sons were shocked and happy at the same time. Her oldest son said it felt kind of weird at first, but that faded as they played.

Mrs. Wilcots expressed her gratitude to the officers for taking the time out on a very hot day to shoot hoops with her boys, a definite community need for all youths. This was a great and positive thing for our community. A very great uplift!