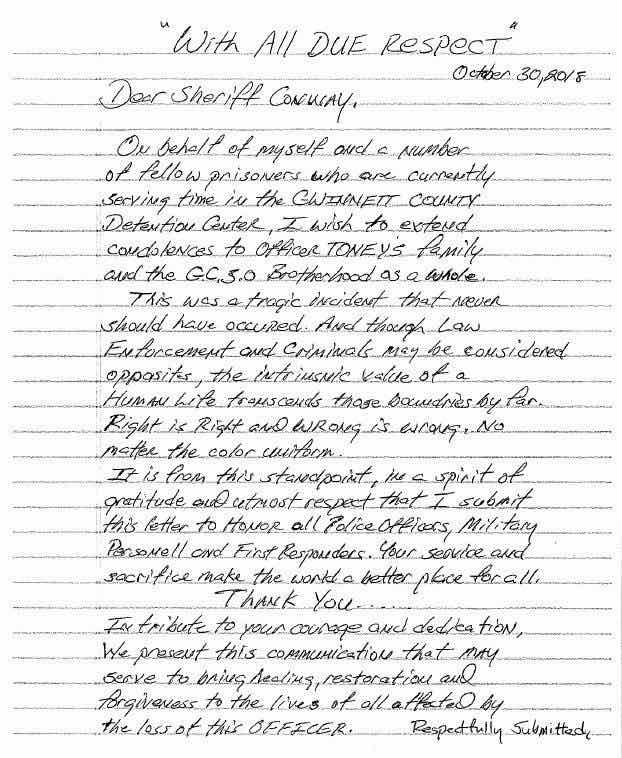 This week’s “Thankful Thursday” would like commend a group of inmates currently housed at the Gwinnett County Detention Center in Gwinnett, Georgia. These inmates wrote an emotional letter to the Sheriff’s Office expressing their sincerest condolences for the loss of Officer Antwan Toney who was shot and killed in the line of duty last month. Though the Gwinnett County Sheriff’s Office says that they have received an overwhelming amount of love and support from the community, they were particularly moved by this letter.

The letter, which was signed by about 20 inmates, was sent three weeks after Officer Toney’s death. In summary, the writer wrote the following: “On behalf of myself and a number of fellow prisoners who are currently serving time, I wish to extend condolences to Officer Toney’s family and the G.C.S.O Brotherhood as a whole. This is a tragic incident that should have never occurred. Though law enforcement and criminals may be considered opposites, the intrinsic value of a human life transcends those boundaries by far. Right is right and wrong is wrong. No matter the color uniform. It is from this standpoint, in a spirit of gratitude and utmost respect that I submit this letter to honor all police officers, military personnel and first responders. Your service and sacrifice make the world a better place for all. In tribute to your courage and dedication, we present this communication that may serve to bring healing, restoration and forgiveness to the lives of all affected by the loss of this officer,” said the inmates.

“We’re not including their names to protect their privacy, but we’re deeply appreciative of this act of kindness from these men. We think that Officer Toney would also be appreciative of their actions and we hope you are, too.”