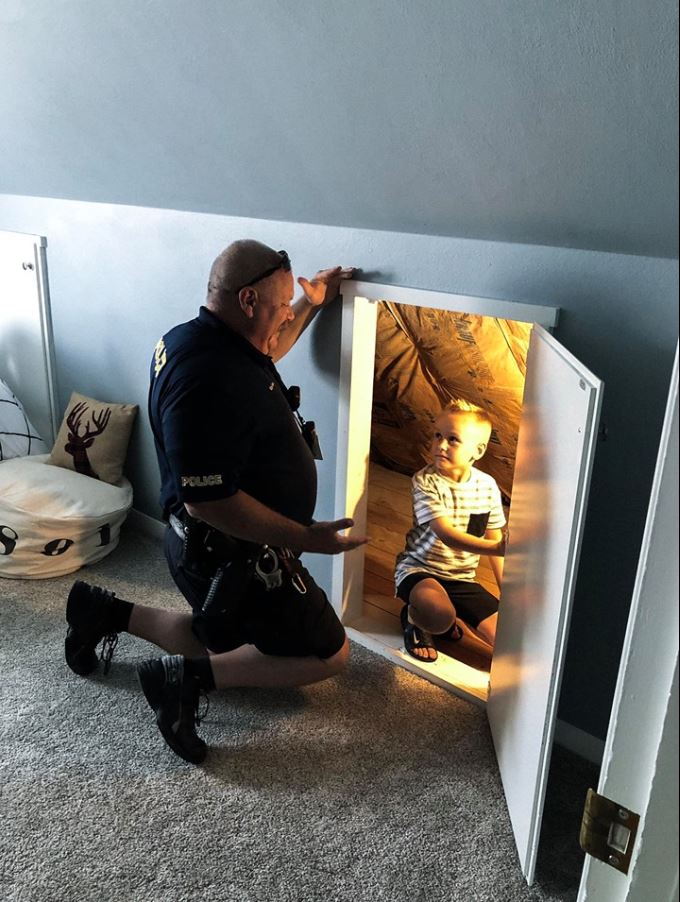 This week’s “Thankful Thursday” would like to commend Eldridge, Iowa Police Department Officer Bruce Schwartz for his compassion in helping ease the mind of six-year-old Hayden Williams, who believed that there were scary monsters living in his new house. Recently, Amanda Williams and her family moved into their new Iowa home. Her son, Hayden, had always shared a room with his older sister, but the new house was big enough for Hayden to have his own. While his sister was excited for the change, Hayden was having a hard time adjusting to the new arrangement.

Hayden was beginning to have trouble sleeping in his new room, even telling his mom that he needed help because he was having scary thoughts and was feeling uneasy.

“My little man has been having severe anxiety since we moved into the new house…I’ve tried everything under the sun to get him to sleep in his own room. Nothing is helping. He says he has something wrong with his head and that he can’t stop the scary thoughts that are creeping into it. He begged me to call the police and a doctor to help him. Seriously breaks my heart into a million pieces,” Amanda wrote in her Facebook post.

Amanda desperately wanted to help her son, so together they went to the Eldridge Police Department. Hayden spoke with Officer Schwartz who decided it was best to visit the Williams’ home, to show the little boy that there was nothing to be afraid of.

Officer Schwartz’ small deed made a huge impact on Hayden, who woke up the next day at 7 a.m. and told his mom that he slept through the night. The next morning, Officer Schwartz visited the Williams home to make sure that Hayden wasn’t afraid to sleep in his room anymore.

“Truly takes a village to raise kids right these days! I am beyond thankful that Officer Schwartz took time out of his busy day to come over and talk with Hayden,” Amanda wrote.