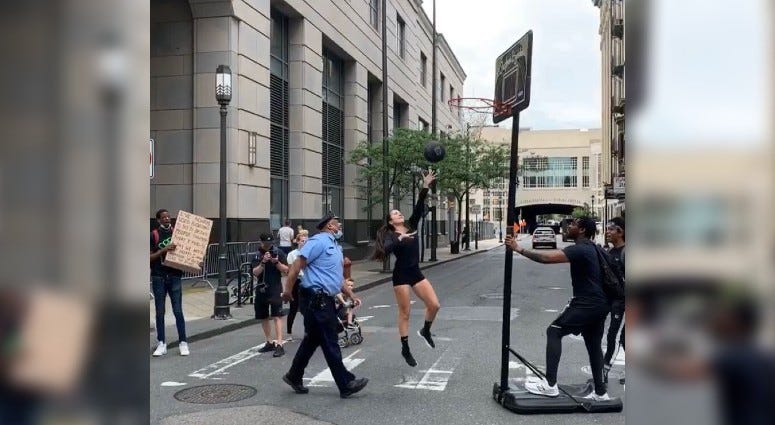 This week’s “Thankful Thursday” would like to highlight the efforts of Stephania Ergemilidze who wanted to ease the tensions between the police and protesters. Stephania watched in shock as people were looting and destroying businesses across the region and said she was inspired to do something. “I decided I would be taking my basketball hoop to pretty much ball in the streets and try to bring people together the one way I know how,” explained Stephania, “which is basketball.”

Stephania proceeded to set up the basketball hoop in different parts of Philadelphia. She wanted everyone to play, especially police officers and protesters — and at the same time, if possible. “I just want to try to bring everybody together and break that tension or the barrier that’s been there the last week really,” she said.  It seemed to work.

At times, the officers and protesters played basketball together. Sometimes, Stephania would get in a quick game of 1-on-1 with one of the officers.

Stephania admitted she wasn’t sure how the police were going to react to this, but it ended up being a really positive experience for both officers and protesters.

One officer told her, “we need more people like you out here doing these types of things.”  Police officers and others now recognize Stephania as she walks around with her basketball hoop.

Stephanie wants to bring her basketball hoop to other cities, including Minneapolis, so she can unite police and protesters there.