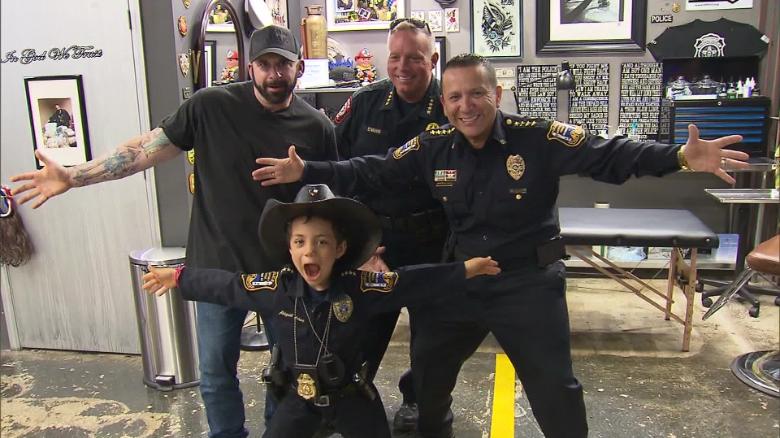 This week’s “Thankful Thursday” would like to honor Police Officer Abigail Arias, Badge #758, a 6-year-old little girl who was sworn in as an honorary officer in Freeport, Texas. Officer Arias had a big dream, to be a police officer, a dream that came true.

Freeport Police Chief Raymond Garivey Jr. first met Abigail at the department’s “Pancakes with Santa” event. Abigail has Wilms tumor, a type of kidney cancer in children. At that meeting, Abigail expressed her desire to become a police officer when she grows up. “You have to meet her to really understand what a great and inspiring young lady she is. The chemo and radiation hasn’t worked and basically the family is now leaving it in God’s hands and praying for a miracle,” said Chief Garivey.

To fulfill Abigail’s dream, Chief Garivey contacted Cop Stop to get a customized Freeport police uniform designed for Abigail. Cop Stop’s owner, Rick Fernandez, donated the uniforms to her, along with the duty rig and gun belt.

Abigail dressed in her uniform and smiling enters the business, Prison Break Tattoos in Houston, Texas with her uncle, Rommel Arias. Owner Bryan Klevens shows Abigail first responder patches from all over the world. During the visit, Freeport Police Department patches are sewn on Abigail’s long-sleeved navy shirt and even on her cowboy boots. She wears her badge around her neck, and a flashlight and pink handcuffs dangle from her belt.

To Abigail’s surprise, Klevens is also a police officer as he shows her his own badge. Since 2013, he has operated the tattoo studio while working as a narcotics officer with the Houston Police Department for over 25 years. His own sister died of cancer, making Abigail’s battle and her desire to be an officer even more personal.”I created this tattoo studio specifically for my brothers and sisters in blue and all first responders from across the country,” he says, noting that it’s also open to the public. People seek a wide range of tattoos from patriotic flags to memorial badges for fallen officers and helmets for fallen firefighters, to coverage for bullet and knife scars. Klevens sees the studio as place of therapy for first responders and their families. “You’re given the opportunity to tell a story, and not just any story, but a story that has defined you and your life and your career, to people who are part of that with you, to a fellow first responder,” he says. “That’s healing.

Rommel Arias proceeds to get a tattoo of Abigail’s name and badge on his calf in honor of his niece. “Now that I’ve got your badge, I’m always going to be fighting the bad guys with you. We’re going to beat them bad guys, baby”, he tells his niece.

“Every day that I wake up, I just dream that I really want to be a police officer and to help fight the bad guys,” Abigail says. The bad guys Abigail is referring to are the cancer cells she is fighting. The uniform, she says, “keeps me brave.”