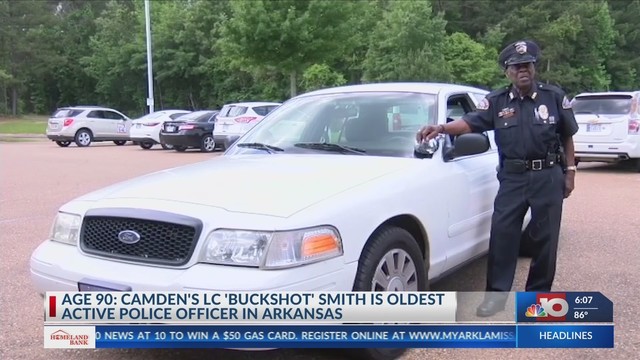 This week’s “Thankful Thursday” would like to honor Arkansas’s oldest active police officer, Leonard Charles Smith, aka L.C.Buckshot, who recently celebrated his 90th birthday. In 2010, Officer Smith retired after 46 year career with the Ouchita County Sheriff’s Office. He was asked to join the Camden Police Department after four months of retirement. The department felt Officer Smith had too much wisdom and knowledge not to share it with their officers. To this day, Officer Smith still works eight hour shifts four-days per week.

“If you’re able to go to work, go to work,” Officer Smith said. “I love law enforcement. That’s one of my careers.” His other duties include being the assistant coroner for a funeral home, a deacon at his church, a neighborhood watch coordinator, serving as a mentor to younger men and the special events coordinator for his police department. Officer Smith say there is nothing that keeps him from working for the county he loves, not his age or his health.

The department and the city of Camden held a celebration for the now 90-year-old. Mayor Julian Lott declared May 12 as L.C. Buckshot day.