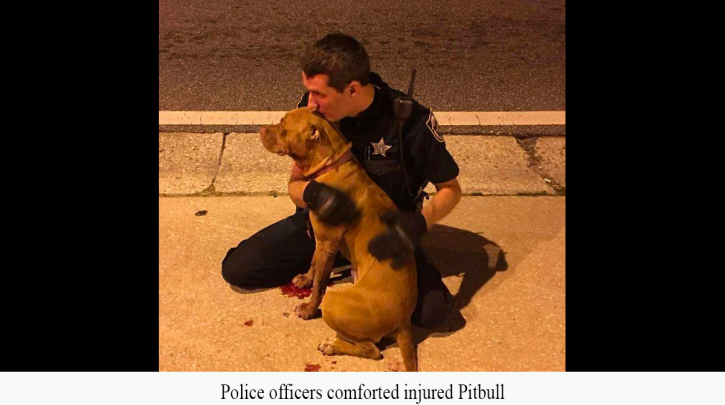 This week’s “Thankful Thursday” would like to commend the actions of Orange County, FL Sheriff Deputies Boggs and Reed for their compassion and kindness in the rescue of two abandoned and injured pit bulls found in the middle of a busy Florida intersection. Responding to a call from a concerned citizen, two pit bulls were found frightened and abandoned in the middle of a busy intersection in the Orlando area.

When Deputies Boggs and Reed arrived, it appeared the pit bulls knew instinctively that the deputies were there to help them, not to hurt them. A passerby captured a photograph of a touching scene of one the deputies providing comfort to the abandoned pit bulls, even kissing one of them on the head. It appeared one of the dogs had an injured paw that was bleeding profusely, so the deputies carefully wrapped the paw to stop the bleeding while waiting for the Orange County Animal Shelter to arrive.

The caring staff at the Orange County Animal Services were so grateful that the deputies were able to save these two sweet and amazing dogs. The Orange County Shelter has named the pit bulls, Justice and Liberty who have been  recovering from their ordeal and will be available for adoption soon.

Law Enforcement everywhere continue to go to work every day defending the public and doing beautiful selfless deeds like making these two dogs feel safe and loved. This story has a happy ending thanks to the wonderful actions of Deputies Boggs and Reed.