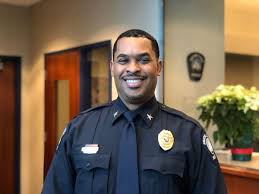 This week’s “Thankful Thursday” would like to honor Prior Lake, Minnesota’s recently named Interim Police Chief, Booker Hodges. His journey is full of inspiration and triumph over adversity. His path has remained guided by love and dedication even through the toughest moments.

Chief Hodges firmly believes that law enforcement is the most noble profession a person could do. “Every time one of us puts on this uniform, we’re telling the public that my life is less important than yours, regardless of your social, economic class or anything else.”

His earliest memory was as a 12-year old growing up in north Minneapolis. When his mother died, a police officer referred to him and his brother in a derogatory term.  At that moment, Hodges could have had hate in his heart but instead, he chose to forgive. “You can’t allow one act or one person to form your attitude or opinion about an entire group of people.”

Once he graduated high school and was preparing to enter college, Hodges discovered he was reading at a fourth-grade level. Hodges was embarrassed but it didn’t discourage him. He taught himself how to read by watching TV news and looking at newspapers. Eventually, Hodges graduated with two Bachelor’s degrees, a Master’s degree, and then his doctorate all while working his way up as an police officer.

Chief Hodges doesn’t see himself as a role model but believes that he is a perfect example of someone who is dedicated and willing to make the commitment to be a police officer.