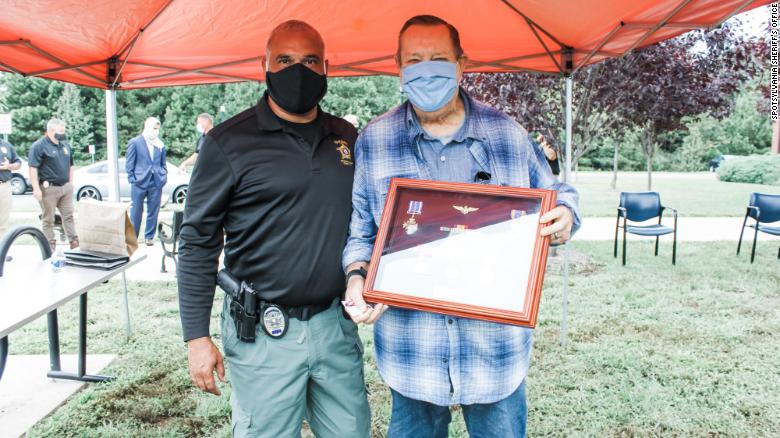 This week’s “Thankful Thursday” would like to recognize the amazing efforts of Spotsylvania County Sheriff’s Office Detective Frank Corona for bringing comfort and relief to retired Marine Lieutenant Colonel Thomas Faleskie after a burglary at his home which resulted in the theft of over ten thousand dollars worth of items to include his military medals, ribbons, and pilot’s wings. In his twenty-five year career with the U.S. Marine Corps, Thomas was awarded several medals to include the Distinguished Flying Cross and an Air Medal.

The case became personal for Detective Corona because he also served in the U.S. Marine Corps. Detective Corona quickly identified and arrested three suspects in the burglary case. Detective Corona was able to recover several of the stolen items at local pawn shops but was unable to recover the original military medals, ribbons, and pilot’s wings.
Detective Corona, along with his supervisor, who was also a U.S.Marine, were able to get the military items replaced by a company in South Carolina, the sheriff’s office said.
Just days before his 84th birthday, the detectives surprised Thomas at a ceremony to present him with a shadow box displaying the replacements of all of his military medals, ribbons and pilot’s wings that were taken from him. Fellow Marines from a local veterans’ group were also in attendance.
“I’m still in a state of shock because I never expected this, and I still can’t believe it happened, but I’m very happy. Usually that’s what you expect from a fellow Marine, is total support and a bond of friendship,” said Thomas.
.