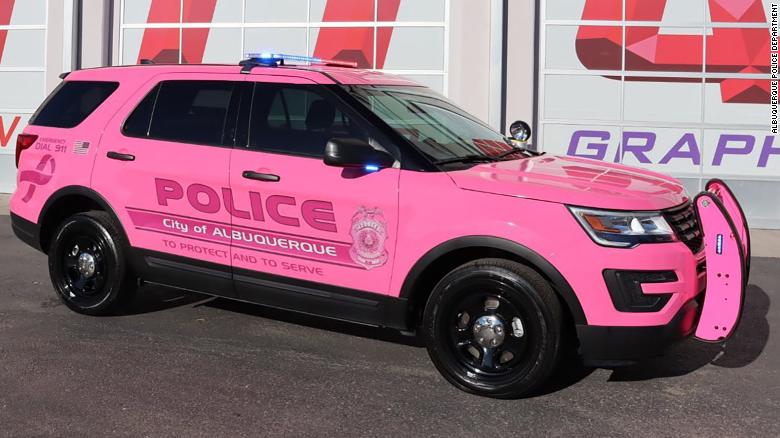 This week’s “Thankful Thursday” would like to commend police departments across the country for bringing awareness to breast cancer. Officers from Altavista, Brookneal and Hurt, Virginia Police Departments are seen wearing the pink breast cancer badges for the month of October.

This initiative was started months ago by Frank Dalton, a breast cancer survivor himself who has spent the last several years raising awareness about the cancer, particularly with men. “My goal was that if I could save one person’s life, I would feel like I had accomplished something,” Dalton said. His social media posting quickly gained support from other local police departments. Due to budgetary constraints with some of the departments, there was a concern on how purchase the pink badges. So GB Stores owner Andy Gill donated $1,400 to buy the breast cancer badges for the police departments in the area. “My mother is a breast cancer survivor, and every community we do business in, we’re not just another business. We’re there to be part of the community, and giving back is very important to me and my family.” said Gill.

Altavista Police Chief Tommy Merricks said the badges have been a conversation starter in the community. They’ve helped raise awareness about breast cancer while at the same time improving police-community relationships. Organizers of this initiative hope it catches on with other departments in the area.  The department plans on wearing the pink badges every October moving forward said Chief Merricks.

The Albuquerque, NM Police Department are also showing its support by painting one of their patrol car bright pink, the official color of breast cancer awareness. “Our mission with the car is to create breast cancer awareness, and acknowledge the fight against all cancer. The pink car shows APD’s support and solidarity throughout the community, as everyone has been affected in some way by cancer,” according to the department’s Facebook post. Nationwide, there are other police departments supporting breast cancer awareness by having their pink police vehicles patrol the streets in their respective communities.

Some police departments have adopted pink badges as part of the Pink Patch Project, a fundraising and awareness-building campaign carried out by public safety agencies worldwide.