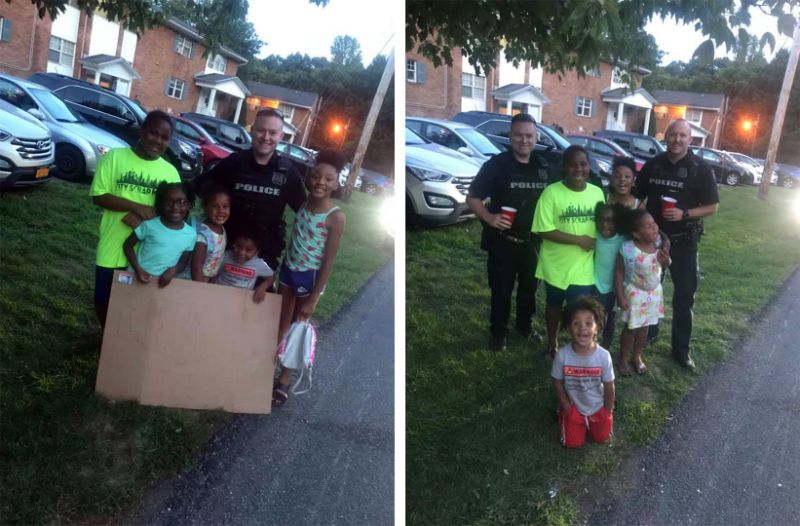 This week’s “Thankful Thursday” would like to commend Newburgh, NY Police Department Officers Thomas O’Connell Jr. and Clayton Dubois who were called to close down a children’s lemonade stand based on a complaint from a local resident who felt the lemonade stand was causing a traffic jam. Instead, the officers were being praised for supporting the young entrepreneurs by buying their lemonade.

Six-year-old Elajah, who usually swims with friends at a neighborhood pool asked her mom, Shanice Sgorbissa if she could start a lemonade stand with her friends. Elajah and a group of her friends helped her mom set up the lemonade stand. Each of the kids had a job, two of the boys held up the sign while the two of the girls poured the lemonade and the another girl approached cars to sell their lemonade.

Elajah’s mom Shanice and another mom, Whitney Glover were standing outside with the children when a Newburgh Police patrol car approached the lemonade stand. “When they first got there I was nervous. I didn’t want them to shut the kids lemonade stand,” said Shanice.

Shanice and Whitney Sgorbissa were extremely appreciative of the officers for being so “sweet” with the kids instead of ruining their fun. Whitney wanted to express her gratitude for the local police officers by posting on her Facebook page the following: “So the kids where I live decided to have a lemonade stand during rush hour. Smart idea. However some bitter person decided to call the cops on them. Instead of the officers shutting it down they decided to have a cup themselves. Thanks Town of Newburgh Police Department.”

Whitney’s Facebook post generated over 1,000 likes and positive comments from users as far as Texas and Canada.

The Newburgh Police Department responded to the Facebook post that they were “proud” their officers had a “positive impact on the community, especially the children.”

Since opening, the kids’ beverage business has been booming, earning them about $520. According to Shanice, the kids will continue to sell lemonade at their stand until school starts since it’s a great way to teach them about teamwork and the value of money.

Whitney says she was so glad to see their story bring smiles to people’s faces.  Whitney said “I only put the story up just to put recognition for the police officers for making their day and buying from their lemonade stand. I didn’t imagine this positivity to go global.”