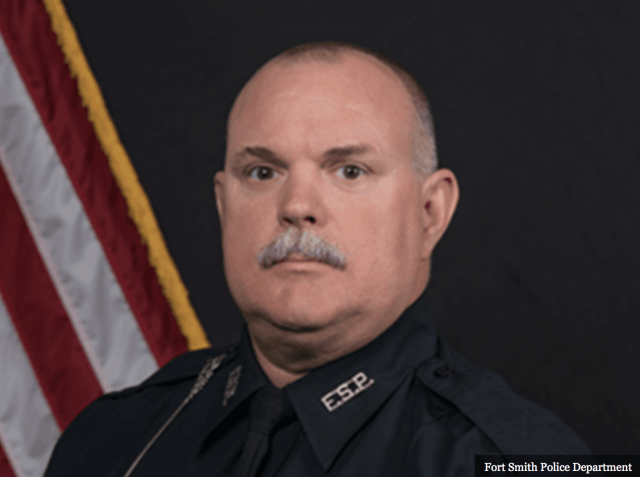 This week’s “Thankful Thursday” would like to recognize the actions of Fort Smith, Arkansas Police Officer Kenneth Martin while shopping at Walmart for toys to donate for the Toys for Tots program. Officer Martin responded to a call at Walmart and learned that a man and woman had been detained by store security for attempting to shoplift groceries. What Officer Martin saw at that moment truly saddened him, two little girls watching their parents being detained while quietly sitting in their shopping cart. It appeared the girls were about 2 and 4 years old. The security employee said the couple hadn’t scanned about half of the items they bagged while at the self-service check-out. Some items that were not scanned were canned goods, pasta, ground beef and a teddy bear. The security employee said that the store had decided to press shoplifting charges against the man, but not his wife.

A video, which was recorded by Officer Martin’s body camera was shared and posted on the Internet which shows what happened next. Officer Martin carries the allegedly stolen items to one of the clerks at the customer service desk. Officer Martin said, “Ring it all up again so I can pay for it. They’re stealing food, and they’ve got kids. I have to take him to jail, but I don’t have to make the kids think I’m an a******.” As Officer Martin returns the $30 worth of groceries and the teddy bear to the woman, he tells her, “I took care of these for you, okay? I understand this is food and things that you need, but if y’all need help, ask for help, okay? Don’t do this, not with babies.”

In an interview with the Washington Post, Officer Martin said as he drove the arrested man in his patrol car, he told him, “Look, I understand what you’re doing, but you guys need to go about this in a different way. I told him that if the store had decided to prosecute both of them, child protective services would have been called, and there would be nothing I could do about it.”

“Officer Martin realizes that everyone has their own struggles in life,” said Aric Mitchell, a public information officer for the Fort Smith Police Department. “He doesn’t ever really count anybody out.”

It’s a lesson Martin said he’s taken to heart because he’s been there. “I’ve been a young parent, wondering where I was going to stretch that nickel to. And when I was growing up, I learned that when a mom and dad don’t have the means, you don’t let the kids suffer. If I see somebody down on their luck, I’ll try to help them however I can, and I’m not the only one. There are thousands and thousands of officers who do the same thing every day and never get any recognition for it,” said Officer Martin.

Officer Martin was later recognized for his kindness and was nominated for the department’s January employee of the month by an off-duty police officer who happened to be at Walmart that same day.

In the nomination submission, an anonymous officer wrote, “Field Training Officer Martin is a wonderful example of what we all strive for. Let’s use his example of kindness to treat each other better in 2020.”

Although Officer Martin is somewhat bewildered by the praise, he said that’s an initiative he’ll proudly stand behind. “We see people at their best and their worst, sometimes in the same call. If somebody doesn’t make the best choices, that doesn’t mean their children should suffer. There are a lot of people in need. Sometimes, even a small kindness can make a big difference.”