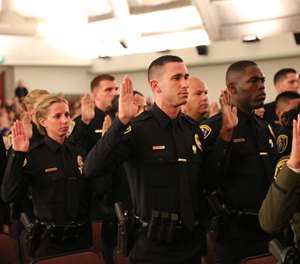 This week’s “Thankful Thursday” would like to commend the San Diego Police Department’s Sergeant Esmeralda Tagaban and Detective Sergeant Jonathan Lowe. Their innovation as recruitment officers has allowed them to build a department with more than just a strong police force but also a team dedicated to community service. They emphasize that police work is more about customer service than it is about exerting authority or power. When the department receives 8,000 applications but only has 150 openings, it can be quite challenging to find who’s out there to truly serve their community.  Officers Tagaban and Lowe have provided their insights and challenges on their responsibility in preparing the next academy class of officers for the job. This information serves as a model for police force recruitment that will positively affect departments and communities across the nation.

1.  What qualities or traits do they look for in new recruits?

When responding to calls, officers often deal with people on the worst day of their lives. Officers have to be sensitive to that, so the best recruits are those who are not only good at talking to people but listening to them as well. The best recruits can be a barista, a cashier or a restaurant server. Police work can also be described as customer service. When they go out into the community, the citizens they serve are customers, so people trained in this area can to be incredible officers. The people who make the best officers are the ones who care every day, no matter how tough the job gets.

2.  How do you confront the negative associations some people have about police work? How do you address the dangers of the job and the tendency of many citizens to distrust police officers?

Recruits are told that they will be well trained in every skill that’s vital to an officer’s job. At the San Diego Police Academy, the recruits will receive 928 hours of training in addition to in-service and crisis response trainings. Every officer will experience everything from fitness to actual physical confrontations so they will know what it is like to be assaulted on the job. Once the recruits graduates the academy, there will be four months of on-the-job training with a Field Training Officer.

And as far as distrust of police officers goes, they are told the more active they are at listening to people they serve, the more likely they will to be respected. Being able to relate to people and be observant to their needs will go a long way in building trust in the communities they serve. For years, the San Diego Police Department has been at the forefront of Community Policing. The department has been a model to other law enforcement agencies throughout the country and has successfully established relationships with their respective communities.

3.  What challenges do you face finding recruits?

The officers have observed that potential recruits are ill-prepared for the physical and mental rigors of a police academy which are challenges in itself. The use of technology has definitely impacted people’s lives but as police officers, they must be proficient in both types of communication, verbal and in the written form. The officers noted that the younger generations aren’t as proficient in writing as the older generations of officers due to the use of technology. These obstacles can be overcome with practice and training. Today’s recruits have demonstrated a willingness to learn and a passion to do something meaningful.

4.  Who makes it as officers? Who doesn’t? What instincts do you have when looking at a new Academy class?

There are recruits who we may think won’t make it through the academy but ultimately become some of the finest officers in the department. Having integrity greatly matters more than any skill the department can teach you. Despite all the trainings they receive, officers have quit the job because it wasn’t what they expected. Expecting people to be perfect is not realistic because no one is perfect. You have to be honest with yourself before choosing this career path.

When the officers finally look at the recruits, they are given the hard facts about the pay, benefits, and that their job is to go out and help people. There will be busy days, and days where they will respond to just a single incident. The officers believe that at the end of every shift, they will be able to go home feeling satisfied. Not everyone can say that about their job.  But here, they believe that you can.