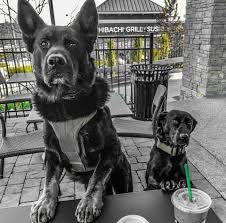 As part of #Humankind Alliance #Thankful Thursday, we would like to highlight a pair of K-9s named #Mattis and #Raider from the #Alpharetta Department of Public Safety in Georgia for the important work they do in their community. #Mattis and #Raider are also social media stars on TikTok and other social media platforms thanks to their handlers, #Sergeant Mark Tappan and #Officer Phil Ritchey.

“The dog immediately created a bridge between #police and #community,” said Sergeant Tappan.

Officer Ritchey is so humbled by how much #Raider has been a positive influence on the digital community.

“I’ve had people message me who have had thoughts about potentially ending their life, and they were kind of on the edge, but Raider was keeping them going. You can’t put a value on that,” said Officer Ritchey.